I wondered when I wrote this title if “personality” was the correct word for bird behavior or if it just applied to humans, so I looked it up in the dictionary.

I came across the definition: “the combination of characteristics and qualities that form an individual’s distinctive character”. Well that was exactly what I meant about my bird ‘friends!”

Take for instance “Kook”, a Kookaburra I have known all 6 years of his life.

His parents were reasonably “friendly” and would follow my wife around on her tractor and catch the insects she would disturb while mowing.

But Kook was barely a year old when he would land on my buggy after mealworms he saw me feeding other birds. It wasn’t long before he was landing on the telephoto lens of my camera to get my attention! He hung around with his parents when they bred again, as is normal with Kookaburras. The previous youngsters assist the parents to raise their siblings.

I set up my camera to photograph the family feeding the baby and gave Kook a few mealworms to take to his new brother or sister. Even though I had seen Kook take an insect or two to the nest he didn’t seem to have his heart in the job. He swallowed all the mealworms I gave him and then some more, but I never got him to take some to the nest.

This year Kook is back landing on my camera and fighting off the Willie Wagtails to get the mealworms, but he is taking them to his own nest to raise another generation.

The Willie’s have all got different personalities. One will land on my knee and get the mealworms, but its mate will chatter away on the ground a few meters away and no encouragement will get it to come up to get them from my hand.

If Kook turns up they both will dive bomb him and sit on his back picking at his feathers until he flies away in frustration! 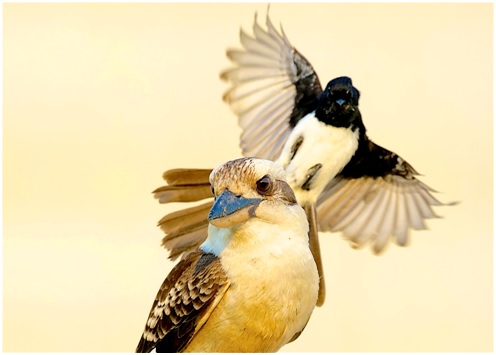 When we first came to this property in 1973 we built some nursery buildings before we built the house and we used to have our lunch outside. We were often visited by a very elegant, but standoffish magpie. We used to throw it bits of fruit cake and it would come quite close to get them.

I decided that wasn’t a good diet and collected a few worms from the compost heap. It just ignored them even though we had seen it pulling worms from their holes. I don’t think it recognized them out of a hole! I overcame this by coating the worms with cake crumbs and all was well.

We have large numbers of magpies on the property and they breed here every year. None has attacked us as I am sure they know we are soft touches for a feed.

I’m sure the way to stop Magpies divebombing is to make friends with them. A few years ago someone dropped off a pure white domestic duck at our ponds fronting Adavale St. It settled in and has become close mates with a wild Pacific Black Duck. Mostly they stay together during the day but sometimes the Black Duck will fly off with the mob to another dam on the property. As it gets close to nightfall “Puddleduck” gets very anxious until her mate returns and they settle down together for the night.

We have another duck, a Wood Duck, with a broken wing. These ducks are usually difficult to approach and fly off when we get within about 20m. This one has recognized it is safe if it keeps close to the nursery where there are plenty of people during daylight hours and will only reluctantly move out of the way when we pass.

The most spectacular birds we have had visiting over the years have been the Major Mitchell Cockatoos. We have known them for about 30 years and we understand the original pair that came to us were pushed out from a group of about six that lived for many years up towards the Gold Creek Reservoir.  The female was in bad shape with a lot of feathers removed and bare skin on her breast. We fed them and they got so used to us that they would tap on the window for us to come out and feed them. They were obviously descendants of aviary escapees a long time ago as this is not their natural habitat. They have some interesting battles with the visiting cockies. About 20 years ago I was walking up the hill after some heavy rain and I heard some baby birds crying at the bottom of a tree. I found two cold little things with barely a pin feather and put then in my shirt and took them home and raised them.

They turned out to be two beautiful Major Mitchells!

Once they were fully grown we let them out and they went about 10m up a Grey Ironbark near our house. The original two Majors came after hearing them begging and one immediately took off with the parents. The other cried until I rescued it after 3 days and he never joined the others.

The original three eventually built up to seven, but lately I have only seen four.

Their feeding was interesting. The female always went to the food first. After she had a few mouthfuls she would allow the male to join her. The youngsters were always emphatically shoved away. After the parents were full they seldom waited for the youngsters to have much before they would make a characteristic call and off they would all go.

I am convinced that there are different personalities with these birds and that their differences can’t be put down to natural instinct.

Maybe the Willie that sits on my knee is the female and her inhibition to sitting on my knee is overcome by her higher requirement for food because of producing eggs.

But that doesn’t apply to Kook’s behavior and anyway I like to believe they are responding to me and making my life more interesting.