Note: This is a never ending story!   The latest instalment is November 2017 but it commences with an article Ed wrote in July 2017.  Scroll down to see the original article.

The Brown Honeyeaters are back on the mistletoe and it looks like the recent rains have encouraged them to breed again. My curiosity got the better of me and I started looking into which mistletoe species I was observing. I soon found out that Dr John Moss was the local guru on mistletoes, because of his interest in the Butterflies and Invertebrates Club which he helped to establish.

The connection is that mistletoes are the host of caterpillars of the Jezebel butterflies. John and another butterfly enthusiast Ross Kendall have written a first-class book entitled “The Mistletoes of Sub-tropical Queensland, New South Wales and Victoria“. 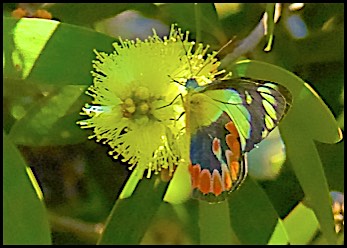 From their book I have easily been able to find out that my mistletoe is the Yellow-Flowered or Long-Flowered Mistletoe (Dendrophthoe vittelina) and it is the host plant for the caterpillars of Scarlet, Red-banded and Black Jezebels and a large number of small Blue Azure butterflies.

One of the interesting facts I gleaned from their book is that some species of mistletoe are parasitic often on other mistletoes. This sound reasonable, as if the Mistletoebird has fed on one species and then goes to feed on a different mistletoe, it is quite likely to deposit the sticky undigested seed from the first species and it might grow.

But how did the first species get to a new host tree?

Well, the answer might be that I found the Mistletoebirds I was photographing were attracted to the bottlebushes to take nectar from the flowers and they could have seeds to deposit.

Now I reflect on it I think this all may have happened many years ago as these trees are about 35 years old and the mistletoes look quite old. Probably they were deposited as sticky seeds by Mistletoebirds several generations ago right under my eyes and I never noticed.

I am looking forward to photographing the brilliantly coloured Jezebel butterflies laying eggs on my mistletoes so the never ending story still has more chapters to come!

It is early October and the Mistletoebirds are back. Two males and one female.

The Brown Honeyeaters are still chasing them off, but not as vigorously this year as they haven’t started nesting yet.

The Mistletoebirds are eating the green berries that have formed from the flowers from the August flowering. The Mistletoe is having a small second flowering, which will spread out the availability of fruit over a longer period. I have at last got my photo of a Mistletoebird eating Mistletoe, but there is still much to find out about the Mistletoebirds in the Bottlebrushes! Both the male and female spent a lot of time taking nectar from the Bottlebrush flowers and just for a very brief moment moved on to the Mistletoe and shelled a fruit and off they went several hundred metres to where I suspect they have a nest. And where were these photos taken? Right next to our staff carpark! In the photo below you can see the thicker, lighter green foliage of the Mistletoe in the top right of the Bottlebrush in the front. That’s where I took the photo of the bird shelling the berry. Mistletoe usually grows 30 metres up the top of Ironbarks and other tall trees well out of easy reach of my cameras, so it has not been easy to get some nice close ups of the colourful Mostletoebirds that feed on their berries. Each winter I have been able to get a few photos when the Mistletoebirds come down to feed on the Broad-leaf Pepper shrubs that have similar size berries, but these are very dense shrubs and it has been difficult to get clear shots of these birds. I found some Mistletoe on some old, but not very high, Bottlebrushes growing alongside one of our Adavale St ponds, so I staked them out last summer hoping to get some good photos of the Mistletoebirds feeding on the berries.

Unfortunately a pair of Brown Honeyeaters had decided to nest in the Mistletoe and aggressively chased out the Mistletoebirds when they came in so I never got any useful photos.  The berries disappeared, however, so they or some other birds or animals must have been successful when I wasn’t watching.

The Mistletoe is flowering now, (late July) and there have been a number of visitors. Brown Honeyeaters, Scarlet Honeyeaters, Striped Honeyeaters, Little Friarbirds, and Spinebills, so the flowers must be a good nectar source. There are lots of different Mistletoes and I could look this one up and see what the botanists have named it. They would tell me all about it being a type of parasitic plant that has sticky berries that Mistletoebirds deposit in their droppings on new plant hosts.

But I’m more interested in finding out for myself what is feeding, breeding, squabbling over it and when it flowers and fruits.

Will the Brown Honeyeaters nest there again this year?