With the dry so bad I have been concentrating my wildlife photography to the two large holes of Gold Creek that border our property.

Of course, the Platypus are the main interest, and now that the pups are growing I am finding the mothers are out feeding frantically through the day. One was out at 2pm in the second week in November!

Now is definitely the time to go watching Platypus!

Find the best spots by looking at the locations where they’ve been sighted in our annual Platypus Survey. Take a chair and just sit quietly and wait! Early in the morning or the last hour before sunset are the times you are most likely to see them. Watch out for lots of bubbles rising to the surface and often a stream of mud being brought up from the bottom of the creek. I find they surface about every 45 seconds while they are feeding.

If you are lucky one will stay on top of the water to chew on the creatures it has stored in its cheeks.

But there is plenty of other life up the creek!

We have several Sandpaper Figs hanging over the water and one very old one has a huge crop ripening at present.

Every few minutes a ripe fig will fall into the water and it can be a torrent of figs falling when a flock of Fig Birds and Orioles start feeding in the tree.

Under the water are a number of Eel-tailed Catfish and I think one has a nest there too.  I am not sure if the fish eat the ripe figs or the creatures attracted by the figs.

Another that hangs around the same area is a good-sized eel. They are ultra-designed and can move with the slightest effort. The creek has a large number of Water Dragons.

Each has a territory and there are frequent standoffs between territory owners. The area “owned” is relative to the dragon’s size and I think the males get a bit more as they appear to be more aggressive.

The Water Dragons were not to be seen as they were hibernating until late August and then they were mostly sitting on the banks or in branches of trees sunning themselves. Now it has heated up they spend much of their time in the water with just their heads poking out. Just occasionally I see a Water Snake, a Keelback, swimming by.

They are beautiful to watch and the ones around here have a bluish tinge. They are quite an aggressive snake when encountered around the house, but they are not poisonous. They eat skinks and frogs and I have heard young cane toads but I have not seen that happening.

Something must though, as millions hatch, but clearly they don’t all survive. Dragonfly larvae are one of the most important food for Platypus and they must be in short supply this year as the number of adults is way down this year.

The adults of most species catch midges and other small insects on the wing and they must be short of food and consequently few are laying eggs in the creek.

One species that is still around and spends all its life cycle at the creek is the Australian Emerald. It never seems to stop flying and is very hard to photograph and I took my best shot of it waiting for the Platypus to appear. Sometimes just watching the combination of wind, reflections and sunlight on the water with it changing like a Kaleidoscope  is worth a photo or two. 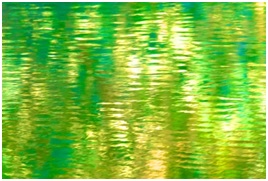 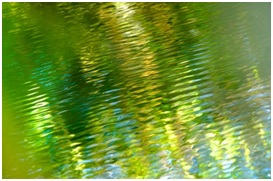 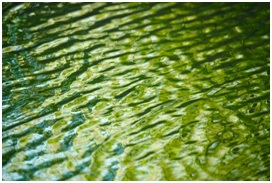 I still get to do a bit of bird photography. My biggest challenge is to get a good photo of the resident Grey Goshawk, which almost every time I’m at the creek flies very fast under the canopy of the trees lining the creek. With the low light because of the closed canopy and the speed the bird goes it is still a challenge.

Equally fast just one metre above the water is the Azure Kingfisher. However, it likes to perch on horizontal branches over the creek, so I have added to the ones naturally there – strategically placed with a suitable background. 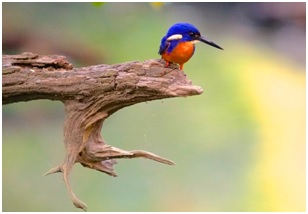 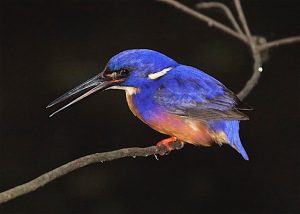 Around the creek are two very interesting ground birds. One is spectacularly coloured, the Noisy Pitta, and the other is highly cryptic, the Russet-tailed Thrush. The Noisy Pitta just visits in the cold weather and returns to nest along the Scenic Rim at higher altitude.

The Russet-tailed Thrush stays all year and nests at the base of a tree in a tangle of vines.

Both are in serious trouble from cats, which are rampant in the Catchment. 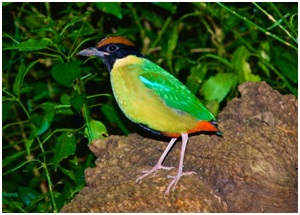 With the Grey Goshawk patrolling and cats along the banks, the creek is a dangerous place for ducklings. There are water rats with their distinctive white tipped tails the size of cats and a vicious predator too.

Yet one very disciplined duck family visits regularly and I have never seen a clutch of chicks move so fast and stay so close to mother. They posed beautifully on a log behind mother before they took off. Another predator is the Nankeen Night Heron.

It is a highly under-rated ambush hunter that I think gets up to a lot of mischief at night. It roosts in the trees along the creek during the day and while the books say it eats frogs and fish.

I think it does well on ducklings and other young birds. We have Australasian Grebes nesting on most of our dams and I think the Nankeens take all their chicks up to about March when the Nankeens move off to the north. There is a lot more going on than is obvious and its well worth the effort to put on some insect repellent and take a chair and sit and watch early one morning or just before dusk. It’s some of our Moggill Catchment fauna and flora at its best.