Recently (April 2020), I have been trying to attract the platypus in our part of Gold Creek to come for a feed of crickets and mealworms.

No luck so far but I have an eager line up of six eel-tailed catfish, the gigantic eel, five short-necked turtles from penny size to dinner plate, one kookaburra and seven water dragons. 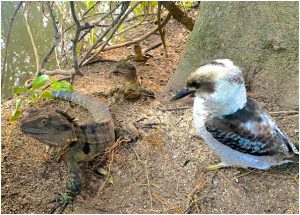 The water dragon is the MCCG’s emblem and Moggill Creek was named after the water Dragon – Magil in the local Yuggera (Jagera) Nation language.

The current scientific name for the water dragon is Intellagama lesueurii which translates to “Intelligent lizard”, a well-deserved name for an animal that has lived as long as the crocodiles – about 20 million years according to the fossil record.

I go down to the creek about 30 minutes before dawn most mornings.

Within minutes I hear huge splashes as the water dragons belly flop into the water off the branches high in the trees overhanging the creek, where they have spent the night. 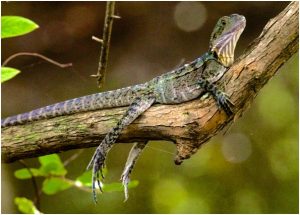 Usually you see just their head protruding from the water as they swim eel-like to the bank powering mostly with their tails which are twice as long as the rest of their body. Climbing up the vertical banks is no trouble and by the time they reach my hide they have drip-dried with no sign they were just out of the water.

Usually there is one large male with his big triangular head, drooping yellowish jowls and bright red underside.

He is accompanied by the dominant female, usually three smaller females and a single juvenile male, just showing red, who keeps much to the periphery of the group.

If I keep up plenty of food they all get on well and think nothing of walking on each other or on me to get an insect.

When the food supply is a bit slow the male will chase off the young male who usually escapes back into the water. Sometimes a warning is given by the male “saluting” rapidly to the young one and he waves back slowly a gesture of submission. 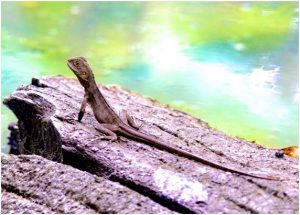 The dominant female will also keep the younger females in check with head bobbing or a determined aggressive move in the transgressors direction.

The young here always emerge in the first week of January, so mating must be early October as the eggs take three months to hatch. They are laid in sandy soil on the creek banks and usually 8 to 10 in a batch.

The young avoid the older water dragons and feed on small insects among the leaf litter. Like the adults they climb the trees at night and rest on the smallest branches to avoid predators. Only a few survive the predators that include brown tree snakes, kookaburras and even older water dragons. Unfortunately I have also seen domestic cats using them as play things. 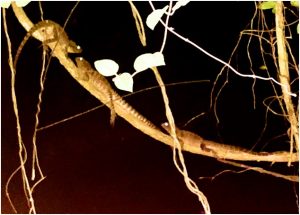 The larger Water Dragons are said to eat figs and Lilli Pillies, but I have never observed that, but I have seen them eating flowers. 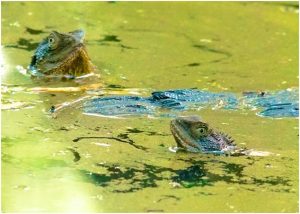 I can attest to their very sharp claws as a small one climbed up my leg leaving four blood spotted tracks.

I can also report that the smaller ones can “walk on water” when they want to cross the creek in a hurry. They are not as good at it as the Green Basilisks (Jesus Christ Lizards) I have witnessed in Costa Rica, but they are pretty impressive with the noise and effort they put into the performance!

When swimming they mainly have their heads out of the water, but they can go much faster fully underwater, which they do to escape the big male.

Wild water dragons are generally thought to be very hard to observe as they splash into the creek well before you manage to see them.  They will appear if you sit quietly and wait.

I find that they quickly are attracted to insects and they have very good eyesight. 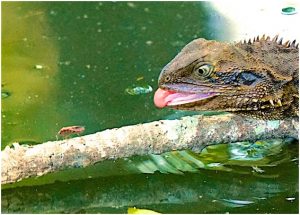 They will watch from 20 metres away and I throw an insect towards them whenever they make a forward move.

I find it only takes about 15 minutes and I can attract them right up to me so I can feed them by hand.

By late May they disappear and I understand they hibernate in burrows they dig and seal up until they emerge in Spring.

Why not put on some insect repellent, take a seat down to their name sake creek and get to know our intelligent lizards?