The first Kids’ Day at the Cottage was held in 2010 and has since become a very popular annual event.  It is usually held on the last Sunday in May. All activities are FREE for children thanks to volunteer expert presenters and workers, plus support from the Lord Mayor’s Suburban Initiative Fund for the Pullenvale Ward.

Presenters offer activities for young people that engage, entertain and inform on some aspect of our local environment and its biodiversity. The adults with them also find out more about the Cottage, the MCCG and its activities.

The day has typically had as its centrepiece a wildlife show, which introduces the kids (and accompanying adults) to a range of native fauna, with opportunities to see the animals, birds and reptiles close up, and to handle the tamer ones.
Other popular activities include:

A free sausage sizzle sees to the hunger pains, and gives an opportunity to chat to other attendees.

For more information, see the report and photos on the most recent Kids Day (2017), and on earlier events in our news archive. Each year in September, a group of volunteer ‘platy-watchers’ gathers before sunrise at the Brookfield Showgrounds prior to heading off to observation posts on Moggill and Gold Creeks.  They spend an hour or so at their appointed site then return to the Showgrounds to deliver their results and share a BBQ breakfast provided by MCCG.

The Annual Platypus Survey began in 2005 and is entirely volunteer-driven. Since the survey began, sightings have fluctuated but happily this unique species is still living in Brisbane’s back yard.

Snapshot over the years:

2016 11 platypus in total; some in new spots from previous years

The following graph shows how sightings have fluctuated over the years we have been doing the snapshot surveys: 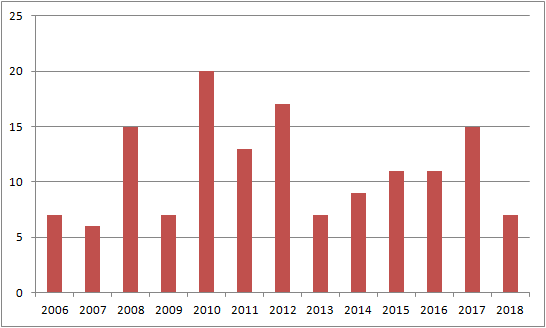 You can see a video of a platypus sighting here (thanks to Tim Vanlint and Debbie Miller).

In 2013 the sightings (with one exception in Upper Brookfield) were all in lower Moggill Creek. This is a higher density urban area of the catchment that has been the focus of tireless community riparian restoration efforts led by MCCG volunteers such as Malcolm Frost, Bryan Hacker and Damien Egan over many years. Perhaps the continual presence of platypus in these areas is in no small part due to their dedication to conserving the area’s biodiversity.

Why was the number of platypus observed lower in 2013 and why were none seen in Gold Creek, a former platypus stronghold? There is no simple answer, but factors may include:

Link to Noam’s video of a platypus in Moggill Ck near the Brookfield Showgrounds taken during the 2011 survey.