When I started on this project of producing a Ladybird Field Guide for the MCCG I thought I might find about 8 species on my property. In a relatively short time I found over twenty species, some of which are very small and can only be reliably identified by taxonomists looking at their minute differences with a microscope.

The really colourful ones are relatively large, but are easily overlooked. Ladybirds are just as prevalent in the gardens in Kenmore as the large properties of Brookfield and Pullenvale so they are easy to find if you look closely.

Many are important beneficial insects helping control pests of citrus and some organically grown vegetable crops such as broccoli and cucumbers. There are also two species locally that eat plants, but their damage is minimal and one, the 28-spotted Ladybird, seems mainly to eat Deadly Nightshade on my property and while it should also be interested in Tomatoes and Potatoes though I have never seen one on my Tomatoes.

The rarer, almost identical 26-spotted Ladybird eats leaves of Pumpkins and I found one and a larva on a neighbour’s pumpkin patch. 28-Spotted Ladybird showing marks where it has been rasping the surface of a Deadly Nightshade weed. The big piece cut out of the leaf was probably by a grasshopper.

Many of the most colourful species feed almost exclusively on Aphis on a wide range of plants including Roses and Hibiscus and several vegetables. They lay their eggs usually on the underside of the leaves near the Aphids and when the larvae hatch they also feed on the Aphids and consume up to about 50 a day as they grow larger. The adults also eat other small insects and some supplement their diet on pollen during hard times. A Common Spotted Ladybird feeding on Aphids which are oblivious of the danger and even climbing over their predator. The upright standing eggs of a Three-banded Ladybird under a Milk Thistle leaf. A final instar larva of the Variable Ladybird that has just shed its exoskeleton.

Another important group of Ladybirds eats scale insects which are important pests of Citrus, Roses and other crops and several native plants. They eat the young scale before they develop their hard waxy coat. Where scale are present they are usually attending ants that feed on the “honey dew” that scale excrete. The ants protect the scale from predators, including Ladybirds, but the Ladybirds pull in their heads and feet under their domed exterior and the ants can’t get to them. They lay their eggs under the scale to protect them and their larvae have many spines. A Red Chilocoris Ladybird feeding on young scale insects on a grapefruit leaf. This species is sold for biological control of several varieties of scale in their citrus industry.

The fourth group feed on Mealybugs, which are an important pest of a wide range of commercial crops and even native plants. A Mealybug Ladybird on a Ficus leaf searching for mealybugs.

They are most easily found on some of our Brisbane Box trees. Their larva are an amazing imitation of a mealybug. The larva of a Mealybug Ladybird, which looks almost identical to the Long-tailed Mealybug but moves much faster.

The Fungus-eating Ladybird is the sole fungus specialist and eats Powdery Mildew a major crop disease of a number of vegetables and other plants when temperatures fall and moisture condenses on the leaves in the mornings. It is commonly found under the leaves of pumpkins as the fruit are ripening. It is thought that the beetles can detect powdery mildew by smell. 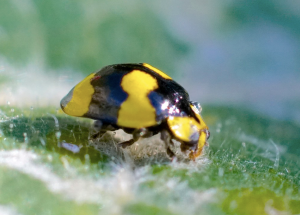 A Fungus-eating Ladybird grazing on powdery mildew under a pumpkin leaf.

A number of Australian Ladybird species have been distributed to New Zealand and the U.S.A. to control pests in horticultural crops. One of our Ladybirds (which are called Ladybugs in the U.S. but they are really a beetle not a bug) has saved the U.S citrus from the particulaly destructive Cottony Cushion Scale.

The only problem is that we exported the Cottony Cushion Scale to the U.S in the first place!

Photographing such tiny animals with a high powered macro lens in the field has been a challenge. I found mid-morning was best as the Ladybirds were warming up in the sun and not moving around as they do later in the day when they tend to hide on the back of the leaves when they detect movements and shadows. I collected some of the 1 to 2mm black ones on the native trees by shaking the branches over an upturned umbrella and staging the photographs on a leaf while they are playing dead but that doesn’t last long before they take off and they are hard to keep in focus. It is possible to collect the Ladybirds and cool them in the fridge and stage the photos with good lighting to allow well focussed photos with a full depth of field. I prefer not to as I enjoy the challenge of using the natural light and conditions in the field and, if possible, show them in action feeding.

All photos and text by Ed Frazer.